"Man, Machine" is a board game, which teaches the basic principles of machine learning using the example of peasant chess. It was created in 2019 as part of the "Wissenschaftsjahr 2019" on the topic of "artificial intelligence" with additional teaching materials on this topic.

The human plays a simple version of peasant chess against a simulated machine that makes its moves according to predetermined rules. Both have three pieces (pawns from the chess game) with which they each try to win after a maximum of 3 moves from each. To see changes in the game strategy of the machine, several rounds are played.

How is the game set up?

Pawn chess can only be played by two opponents. However, in order to follow all the rules of the machine so that it can decide to make a move, the tasks of the machine are divided so that "HUMAN, machine" can be played by 5 people. The people sit in a circle around the playing field.

Each player takes on a special role, which is explained to him by a role card.

The game consists of:

In "Man, Machine!" you play the game of peasant chess between a human and a machine on a small playing field with 3 by 3 squares. The aim of the game is to defeat the opponent by either throwing all his pieces out of the game, blocking him or by using your own pieces to reach the opponent's side of the board.

Each player has three game pieces, which are placed on opposite sides of the board. Human and machine take turns drawing.[1]

The playing pieces can be moved like pawns in chess. So there are two move options:[2]

There are three ways to win:[2]

Place the game board unfolded in front of you and get the game material ready. To do this, you place the human game pieces on the human side of the board and the machine game pieces on the machine side of the board. The 24 situation cards are stacked on the three boxes labelled "Moves" according to their designations A, B or C and their consecutive numbering. Then the colour cards are sorted according to their colour and placed on the corresponding colour boxes on the board.

Finally, you hand out the role cards. One person takes over the role of the human and plays as cleverly as possible against the machine. The remaining players together take over the task of the machine.[1]

The human starts the game and draws first in each new round. The human moves either with his right or middle figure. Moving with the left figure is equivalent to moving the right figure. This move is then merely mirrored.

Then it's the machine's turn: 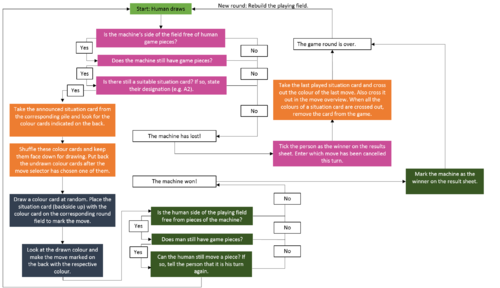